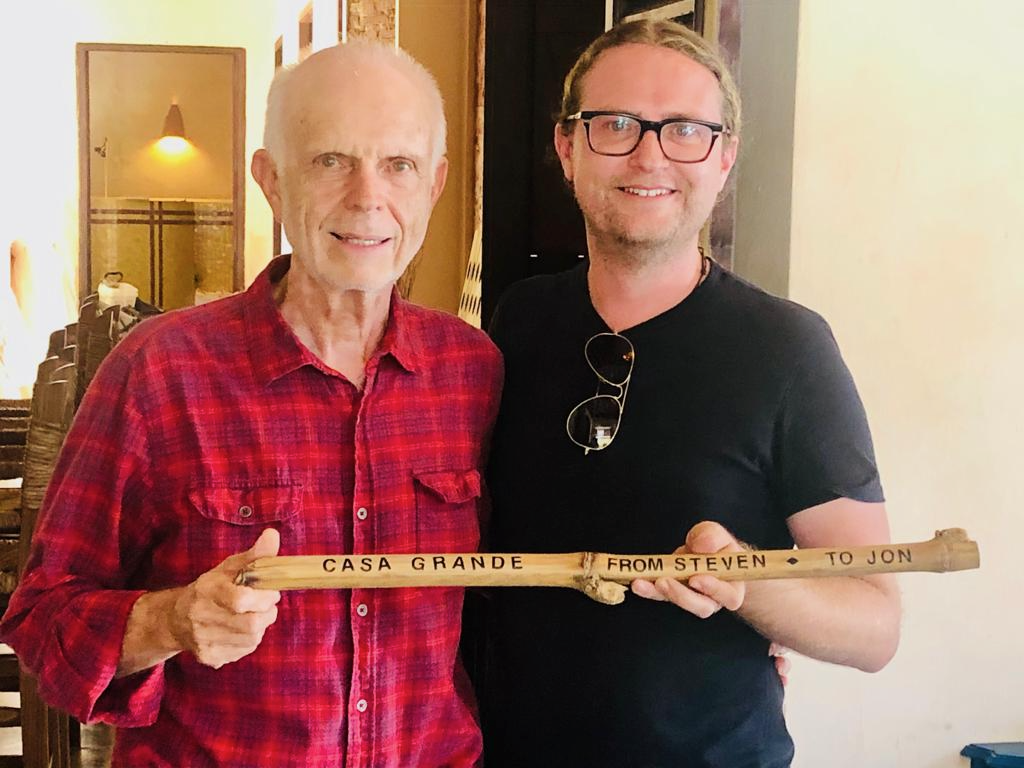 In 1947 the hacienda was built using the railroad tracks as support beams. At that time Miguel’s son Pedro bought the farm and lived in the hacienda with his wife and three sons. His wife taught school to the local children. Horses, cows and mules were kept on the property across the road.

Pedro operated the farm for 20 years. He had as many as 36 farm hands working the land. The coffee was dried in the area now used as a parking lot. Pedro sold 107 acres now comprising the hotel property to his loyal butler Mariano Orquelle for a nominal sum. Orquelle sold to a St. Thomas hotelier, James Pepperdine, who never used the property. In 1971 he traded the parcel for two condominiums owned by Cesar Toledo. When Toledo, a local “Utuadeño,” first came to look at the property it was so overgrown by the tropical jungle that he couldn’t locate it. In frustration he stopped by the roadside and asked a little boy if he knew of the place. “Oh, la casa grande. It’s over there.”, the boy exclaimed, pointing the way. The place has been called Casa Grande ever since.

In the mid 80’s, Cesar Toledo embarked on construction of the guest cabins, the conference building, and the manager’s residence. In 1988 Casa Grande opened for business.

While guests for four days in 1995, Steven Weingarten and his wife, Marlene, were approached by several of the staff members who encouraged them to buy the hotel. Six month later they owned it. Marlene moved from Long Island to live in the residence and, without any experience in the hotel business, became the resident manager. During the first year Steven commuted from New York spending 9 to 10 days per month living and working at Casa Grande, while Marlene developed the restaurant’s menu.

The business was growing until September 21, 1998 when the 165 mile an hour winds of Hurricane George tore through the valley. Electricity would not be restored for 3 weeks. Phone service was out for 5 weeks and the entire water supply system had to be rebuilt, leaving the property dry for about a month. The hotel was closed for business until late November.

As time went on Steven spent more time in Puerto Rico and less time in New York. He sold his house in Sea Cliff, Long Island and closed his law office. In the year 2000 the couple divorced and Steven became the sole owner of Casa Grande.

Almost 20 years to the day on September 20, 2017, Hurricane Maria hit Puerto Rico and once again rendered Casa Grande inoperable. The situation was so bad that Steven’s son had to charter a helicopter to get to Utuado to make sure his dad was ok. When he arrived, he found Steven unwilling to leave. He had work to do. He had to rebuild Casa Grande at age 74.

It took him and his three-man crew of Wilson, Hector, and Frank three years, but they restored the property meticulously during these years.

In 2021, the new chapter of Casa Grande began when Jon Vidar, who had been living in Puerto Rico for almost four years was sent pictures of Casa Grande by his lawyer asking if he might be interested in the property. It was the middle of the COVID pandemic and Jon had been focusing on his own personal self growth, while developing a community of likeminded individuals on the island called Treat Your Self.

When Jon and Steven met, they soon developed a deep bond. They became a team in making the deal happen and both worked hard to make sure that Casa Grande would live on.

Jon’s vision is to continue to steward Casa Grande as a place for reflection and relaxation, a place to connect with others, as well as with nature. He hopes to create a space that practitioners of all varieties are excited to bring their own communities and individuals look forward to retreating from city life.

When the hotel first opened it was part of the Island’s parador program and was known as Parador Casa Grande. In 1997 the name was changed to Hotel La Casa Grande. In 2002 the name once again changed to Casa Grande Mountain Retreat to more accurately describe its setting and intention. And now, 20 years later, we look forward to continuing these traditions and  welcoming you to Casa Grande.